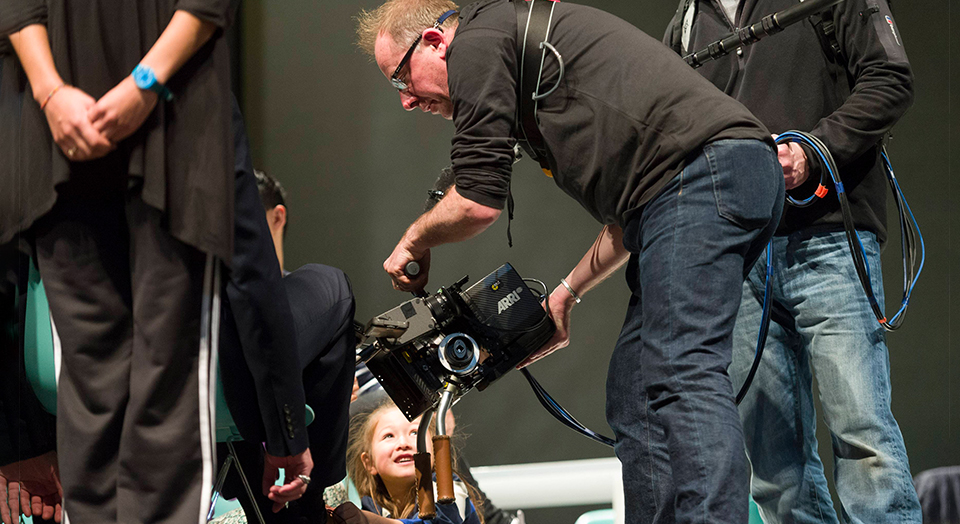 The film had two very unique selling points, and was an incredible feat of Operating as John explains:

“Lost in London” is a film based around the experiences of Woody Harrelson on an eventful night in London. There were brawls in nightclubs, Arab princes, a taxi chase, a police chase, a night in the cells and a dreamlike appearance by Willie Nelson. Some of it is true.

Woody had admired DOP Nigel Willoughby’s work and asked him to light it and Nigel offered me the chance to operate. Earlier on in pre-production Woody and Nigel had decided to shoot the whole film in one shot. “ Oh, one more thing “ Nigel informed me. “ they want to stream it and broadcast it live to 500 cinemas in the USA.”

When the script arrived it covered about 100 pages. That meant it would run to about a 100 minutes. It started on stage in a West End theatre, journeyed back stage and upstairs to a dressing room, back down again and out through the stage door. There was a walk and talk to a restaurant, a ride in a VW camper van with 5 actors to a nightclub where there is a fight with best buddy Owen Wilson. This is followed by two taxi rides through London. Woody is arrested in a London park followed by a night in the police station; a guest appearance by Willie Nelson and it finishes on Waterloo Bridge. In all there were 14 locations and 30 principle actors.

The cameras were supplied by rental house 24-7. We would shoot on an Arri Mini and after rejecting zooms, 32mm and 40mm lenses we settled on a 28mm prime. Steadicam and Movi were both out because I knew I couldn’t hold them for that long and we couldn’t make the batteries last. With an easy rig I wouldn’t be able to get in and out of the vehicles so we went with traditional handheld.

Working with Graham Hawkins at 24-7 we developed a rucksack for me to wear that would carry the live link transmitter and a separate link for focus puller George Grieves. (There was a half second delay on the live link). Various bits of sound gear were added and batteries to power it all for 100 minutes. We would record on a card as well as transmitting live but we would only get 103 minutes on the card, too close for comfort. A loom cable ran from the rucksack to the camera. The loom contained 6 cables, 3 bnc, a power cable and two audio cables.

Graham manufactured a swivel that a small starlight monitor fixed onto above the matte box. I would also use the monitor that flipped out from the eyepiece and the viewfinder. An optician made me some specialized glasses so I could focus on them all and the far distance. We added more handgrip positions, as there was a fair bit of ground level work and lifting off the shoulder. We stripped back the camera as much as we could. Inevitably much of it was back on again by the time we shot. 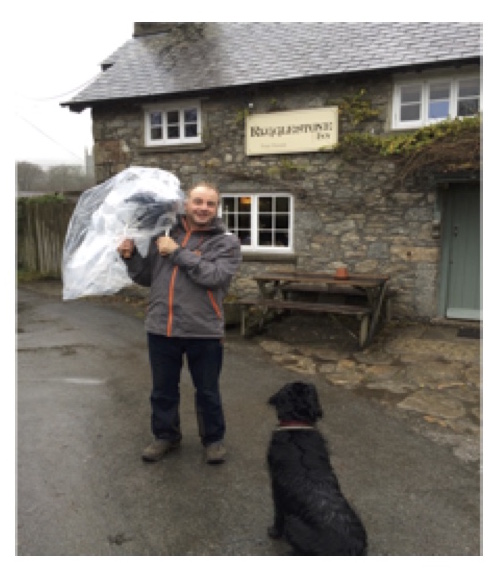 I was concerned that I would not be able to make it through 100 minutes with all the gear I was going to carry. 24-7 provided me with a camera and a full rucksack that I took back to Devon with me. I did two 1 ½ hour walks across Dartmoor with a camera on my shoulder and the rucksack on my back.

I had always run but I increased it to 10 miles 3 times a week, put an exercise bike in the house and worked on some Pilates.

Pre- production was 6 weeks with a break over Christmas. At first I was only coming in a couple of days a week. We increased this as we all thought I needed to be there more for the rehearsals.

The rehearsals started off by shooting with a handy –cam in a rehearsal room at the production office where the layout of the sets was marked by tape on the floor.

Woody Harrelson had written the script, he was director and the leading man. With one camera and one shot he knew where he wanted to have the camera for each moment and piece of dialogue. The problem was getting to those positions in an elegant way. I was having to think as much as an editor as an operator. This was the hardest part of the process. How to get what was needed, getting particular parts of dialogue, getting the reaction, but trying to get it in a fluid natural way without moving the camera too much. Nigel reminded me ”An operator always tires of a shot before the audience”.

We started working with the shooting camera and on the real locations. Grip Steve Weightman and focus puller George Grieves joined us along with loader Dan Evans and second grip Jack Foran. Steve made an enormous difference to the process. He took charge of all the stuff behind camera that I had been dealing with and that had been a distraction from the operating.

The moment we started getting in and out of taxis it became clear that it wasn’t going to work with me wearing the rucksack. I just couldn’t get in and out fast enough or operate when in them. So it was decided that Steve would wear the rucksack and Nigel suggested that we put it on hooks placed high so the signal from the transmitter was not lost when I got in to vehicles. It wasn’t perfect as we now had a loom running between us with a danger it could get caught but it freed me up and worked better than the alternatives.

Gradually we started stringing the locations together. As with any creative process the script was changing which made it harder to keep track of the camera plan and my moves. Nigel and script supervisor Jeanette McGrath were based at the production office with monitors where Nigel was doing a running grade. We had a talkback system so they could give me prompts if needs be. On another channel Nigel had a link to George for stop-pulls. 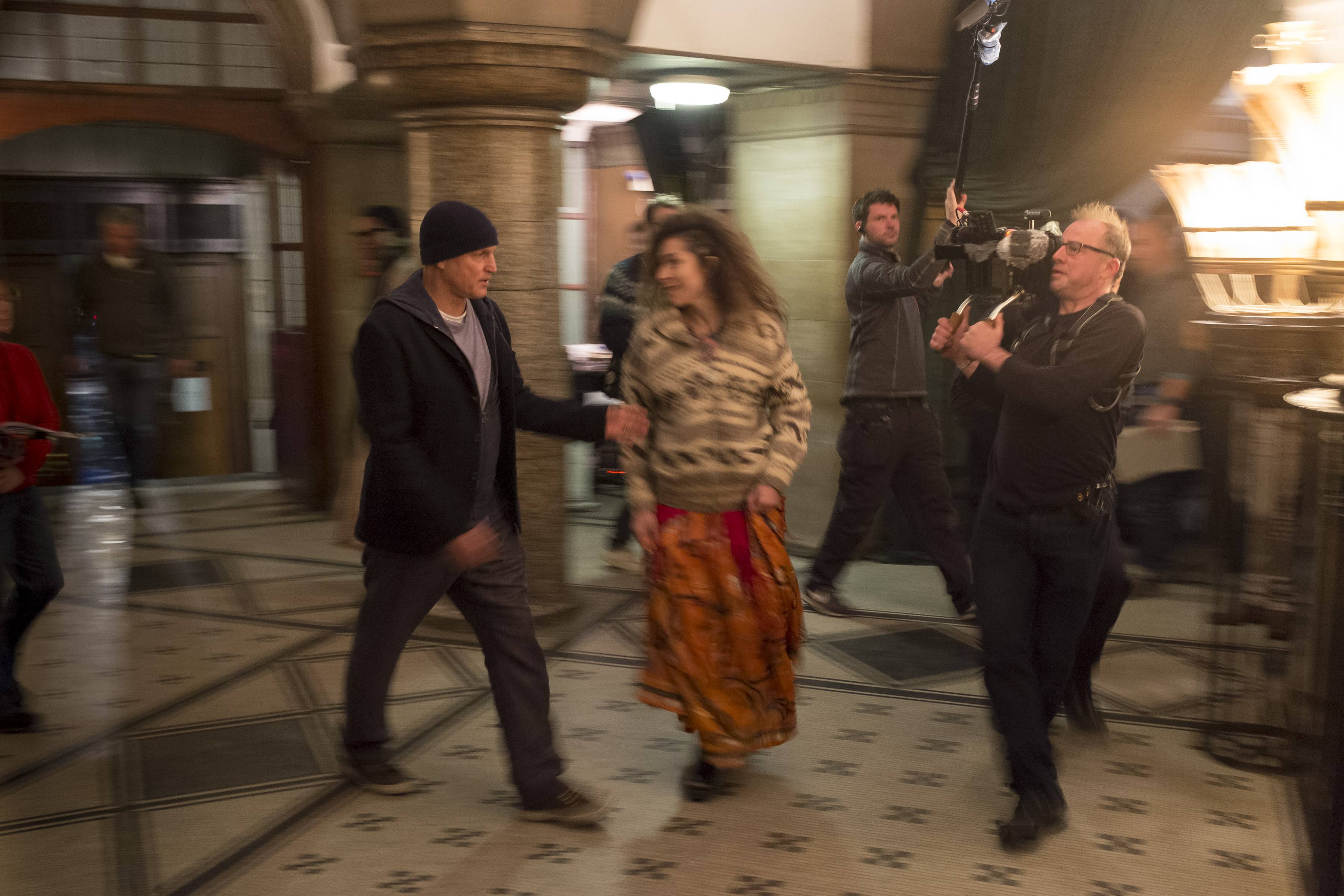 It emerged that there was going to be a problem with children’s hours. In the final week the intention had been to shoot two dress rehearsals in daylight hours followed by three night shoots, doing two recorded runs and finally the live shoot. But with young children we couldn’t shoot three nights in a row. We now had to do the two-recorded runs in one night followed by the live shoot the following night.

We had yet to run the whole film through on camera and none of us were sure if we could do one run never mind two in one night. So it was decided to bring in another operator as cover and to shoot some of the rehearsals. Mark Milsome was available so we snapped him up. It was amazing how soon he got up to speed, especially as I was hogging most of the rehearsals. He gave his full support and was always generous with his advice.

Monday; we would start with two dress rehearsals. It went remarkably well for the first run. We got all the way through and all the technology held up. It was always a worry that the video link would fail or the link to the focus system. We were also concerned about the lens fogging up. We were shooting in January and going from cold outside to warm interiors. Graham made us a filter tray we could pull out in shot should it steam up, without it being seen.

Rather than do another rehearsal that night we set up monitors in the production office and played back the shot for all the cast and crew. Woody would stop playback to give notes as we reviewed. It was terrifying; they always seemed to be for camera.

Tuesday, Mark did the rehearsal. There were a number of technical problems, with the camera going down twice due to a short in an audio cable. There was no time for a second run so we had lost two of our dress rehearsals.

Wednesday, now it was time to shoot, starting with the two recorded runs. 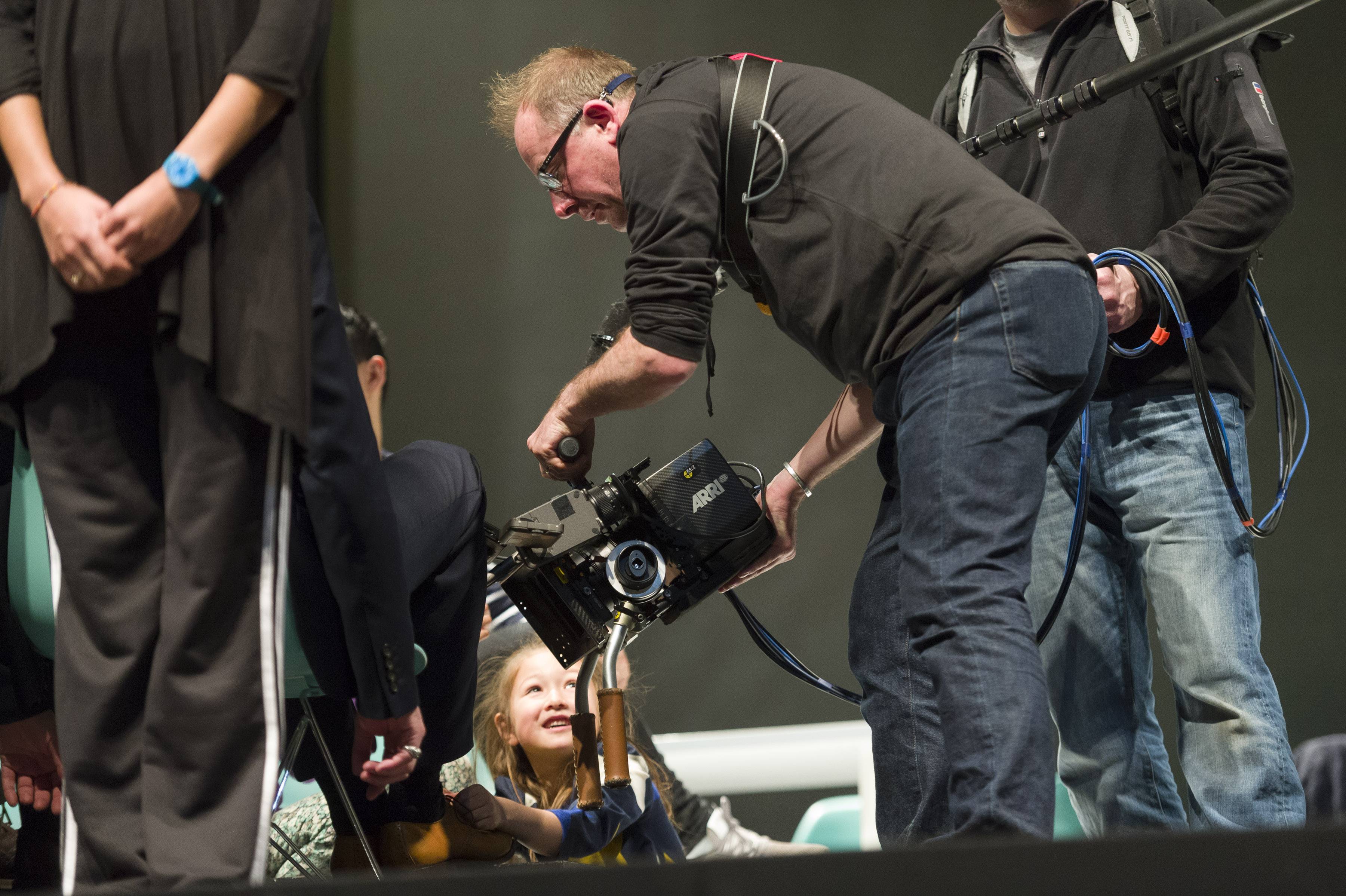 Needless to say it was a nervous few hours leading up to turn over. I spent the last hour pacing back and forth on the theatre stage, where the shot would start, running the film through my head. The opening shot was tricky and involved holding the camera low on shoe laces being tied for about 20 seconds then moving off and up onto the shoulder to find Woody and then setting off back stage. 100 minutes later it was done and it had gone well. We had a film even if things went wrong on the live run.

Next Mark did a recorded run and I rode with the back up camera in the support vehicle. An additional vehicle travelled with us while on the move. This was used to relay the live signal from the camera to the receivers that covered over two square miles of London. 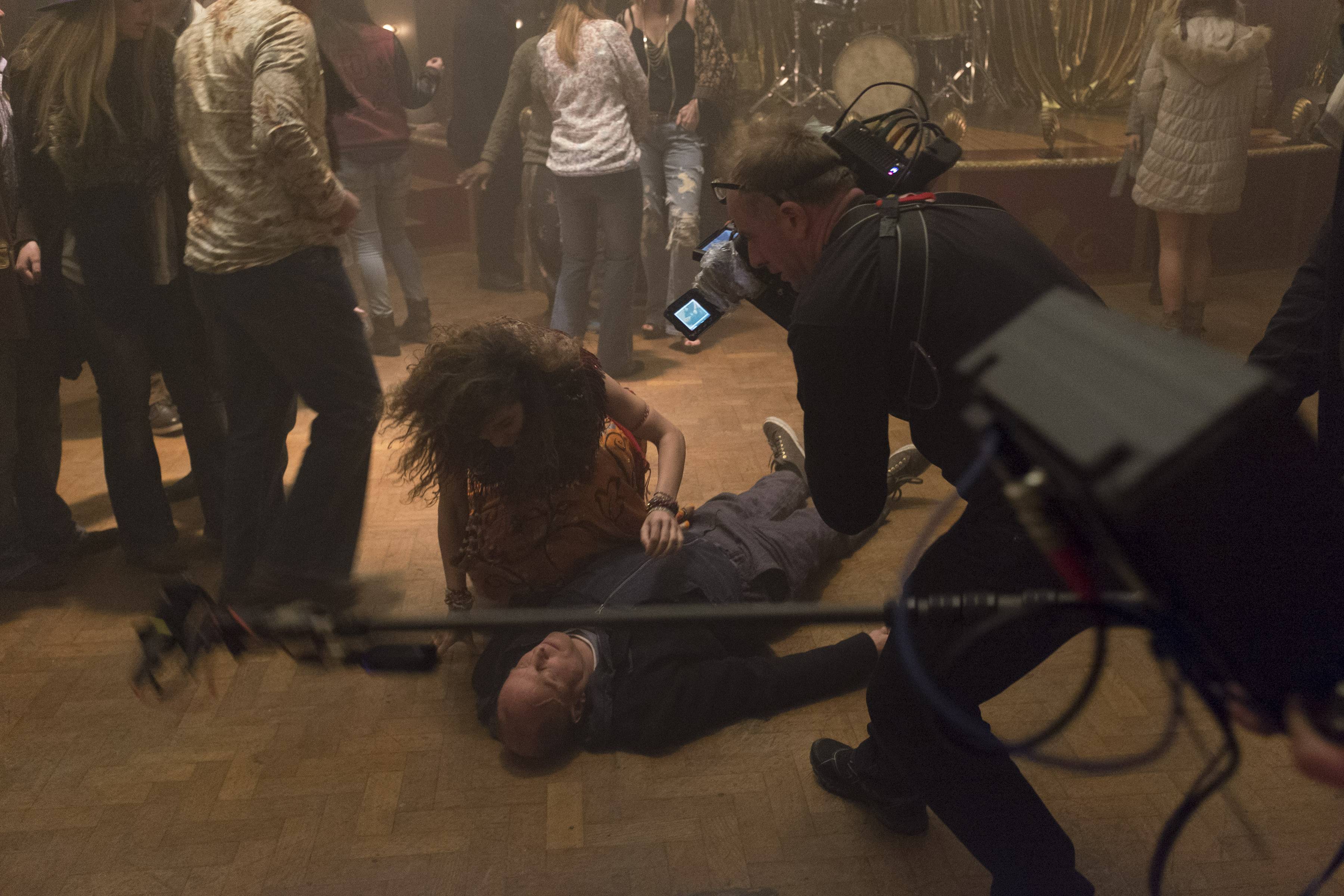 It was amazing to see all the work that went on behind the camera that you are unaware of while looking through the viewfinder.

Sparks dashing (yes its true) to move lights out of shot after they had served their purpose. Police motorcyclist closing off side streets as we drove down Kingsway. The AD’s marshalling the supporting artists as the Art Department converted the nightclub into a police station while we were shooting outside. And finally the closing of Waterloo bridge for the end of the film.

Mark did a fantastic job. I am still staggered how he got it all into his head with such little rehearsal time. All the way through Nigel and I knew that we had a fantastic camera and grip team. George’s focus pulling had been faultless and we had immense support from Graham and 24-7.

Thursday, the night of the live shoot started with the police closing down Waterloo Bridge due to the discovery of a WW2 bomb in the Thames. There was a rapid re think, but fortunately the bridge reopened before we started. There were 30 principle artists; over 250 supporting artists and 260 crew involved that night in what we hoped would be a cinema first.

We assembled on the theatre stage. 20 minutes before we went live we started to get the countdown from the live broadcast team. I tried to ignore it and surprisingly I was much more relaxed that I had been on the first one. If we could get a good start then I thought we would be ok, though 100 minutes seemed along way away.

Early on I lost track of the dialogue a little and I had to work off instinct more than the cues of the earlier take.

The operating felt better for it and the camera guys told me likewise on the bridge when we finished.

It went remarkably well bar a couple of things. An actor forgetting he was in a scene and arriving late to it. I tilted up to Willie Nelson too early as I tried to find a seated position that Steve had prepared for me. 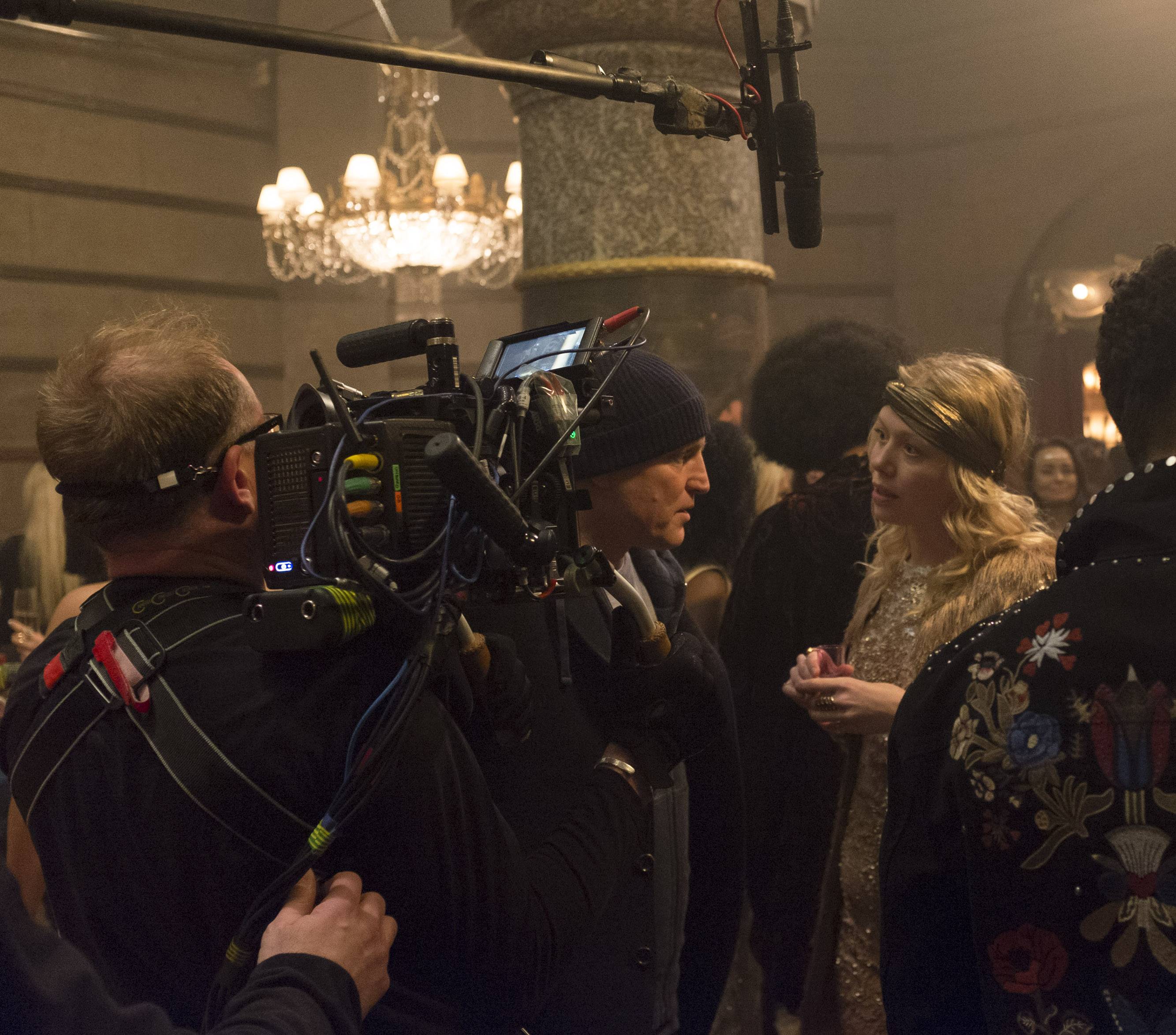 Wrap was called on Waterloo Bridge and the rest of the camera crew were joined by Mark Milsome, who passed me a very welcome bottle of London Pride.

We use cookies to ensure that we give you the best experience on our website. If you continue to use this site we will assume that you are happy with it.OkPrivacy policy